The Ripple effect of Nia’s JOY through the Community 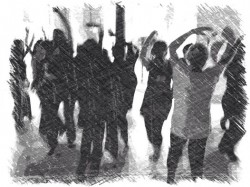 In 1993, inspired by the movement forms of Nia, I opened my first studio; in downtown Albany, NY. Three years later, I needed to move. I chose another urban location.  I wanted my own Nia studio space for the autonomy it offered, the ability to create the space as I wanted and to have choice in programing.  My studio is in an ethnically diverse and economically challenged location.  Despite this, Nia at my studio has attracted an awesome community that loves Nia!  Back in 1993, in addition to my regular Nia classes, I wanted to reach out to my neighborhood community in a more expanded way in deep appreciate for everything Nia has inspired in my life. My fee, my cosmic salary would be love and the satisfaction that I am offering Nia to women that could not afford it or would even think of attending a Nia class on their own. My first offering of Nia was at Albany’s  battered women’s shelter. The class was not satisfying, the room was inappropriate and the women were distracted by their children and other basic needs. I wanted my class to be offered at my studio. I mentioned this to a Nia student, who was a social worker and she told me that there was a women’s drug rehabilitation center, call The Next Step, right across the street from my 1st studio, housed in an old nunnery. I contacted the program director and she was willing to let my Nia program become part of the programming for these women. It was perfect!  Their program was a  6 – 9 month in-house rehab that would allow for on-going participation in Nia while they are preparing for their “next step” in life.  I have loved working with this group of women as it tapped into my “creative source” to turn them on to Nia’s JOY, despite body, emotional and trust issues, low esteem, mental illnesses, physically detoxing and a mentality that never considered Joy and  body pleasure in a particularly healthy way.

Last year, after approximately 20 years of providing this program pro bono, I decided to look into the possibility of obtaining grant funding.  About this time, The Next Step facility  also moved out of their former location and despite their increase in beds, their grant money did not increase. Finances for their basic needs were farther stressed and allotting funds for the Nia program I was offering  was not an option. A  student in my Nia class was a grant writer and offered to assist me in looking into a grant for the Nia program. The search was unsuccessful as grant money is currently very limited and  fund allocation is very strict.  Strangely enough, I was relieved, I was happy, once again to donate my studio space and Nia class time, to the Women of the Next Step and receive my cosmic salary in return, however, something had shifted.  In order to further contribute to the women of the Next Step, I further investigated what the women needed and found that basic resources at The Next Step were very tight  and the women frequently ran out of basic supplies before the end of the month . So, I decided to see if there was a way with the mutual love of Nia and the wonderful sense of community that is created at my studio by the women who regularly attended  my Nia classes would be willing to help support the Women of the Next Step. I  planned an event where the women in my weekly classes would dance together with the women of the Next Step and share in the JOY of Nia,  It was an incredible moment of Nia JOY and community! After the joint Nia class, the women in my daily Nia classes laid out an overwhelming amount of donated; clothes, coats, and blankets, along with requested hygiene and beauty and cleaning supplies.   We all shared the enjoyment as the women of the Next Step “shopped” as  many of the Women were brought to tears with the overwhelming show of generosity  by  the Nia women of my studio. It was a very powerful moment when we realized we were  all WOMEN dancing in Nia’s JOY and community. Following this amazing Nia event, a local restaurateur, and avid Nia dancer, offered to host a “Next Step” evening at her restaurant. Twenty percent of the evening proceeds were donated to the women of the Next Step and an outstanding $1200 was raised! I feel so honored to be able to be a partner in, and developer of, a community of Nia love in a diverse number of ways and the women of the Next Step continually remind me how lucky I am. 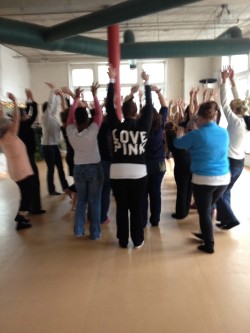 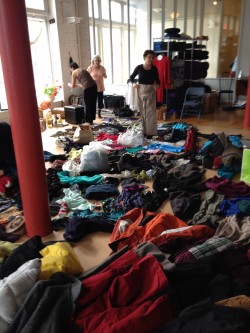